Audio Sales with Consult and Guidance

Nordost’s original Flatline loudspeaker cable introduced the audio world to an entirely new level of performance and a unique production technique. Our proprietary, extruded FEP cables, with their thin, flat profile don’t just look different – their deceptive simplicity is a uniquely elegant answer to the conflicting requirements for low resistance, capacitance and inductance that limit the performance of more conventional cable configurations. Now, by re-examining the geometry of each cable, we have reduced dielectric effects even further as well as optimized the physical spacing of the conductors. This results in significant musical gains, allowing White Lightning Speaker Cables to establish a completely new performance benchmark at this price point and deliver greater power and musical purpose from your system than you would have thought possible.

call us at 9819257839 before you buy to discuss technical suitability.
Category: Speaker Cables

Nordost White Lightning Speaker Cable is a variation on Nordost’s original Flatline loudspeaker cable introduced the audio world to both an entirely new level of performance and a unique production technique. Nordost’s proprietary, extruded FEP cables, with their thin, flat profile don’t just look different – their deceptive simplicity is a uniquely elegant answer to the conflicting requirements for low resistance, capacitance and inductance that limit the performance of more conventional cable configurations. Now, by re-examining the geometry of each cable,

Nordost has reduced dielectric effects still further as well as optimizing the physical spacing of the conductors. This results in significant musical gains, allowing the White Lightning Anniversary to step straight into the shoes of its illustrious predecessor by once again, establishing a completely new performance benchmark at this price point, delivering greater power and musical purpose from your system than you would have thought possible. 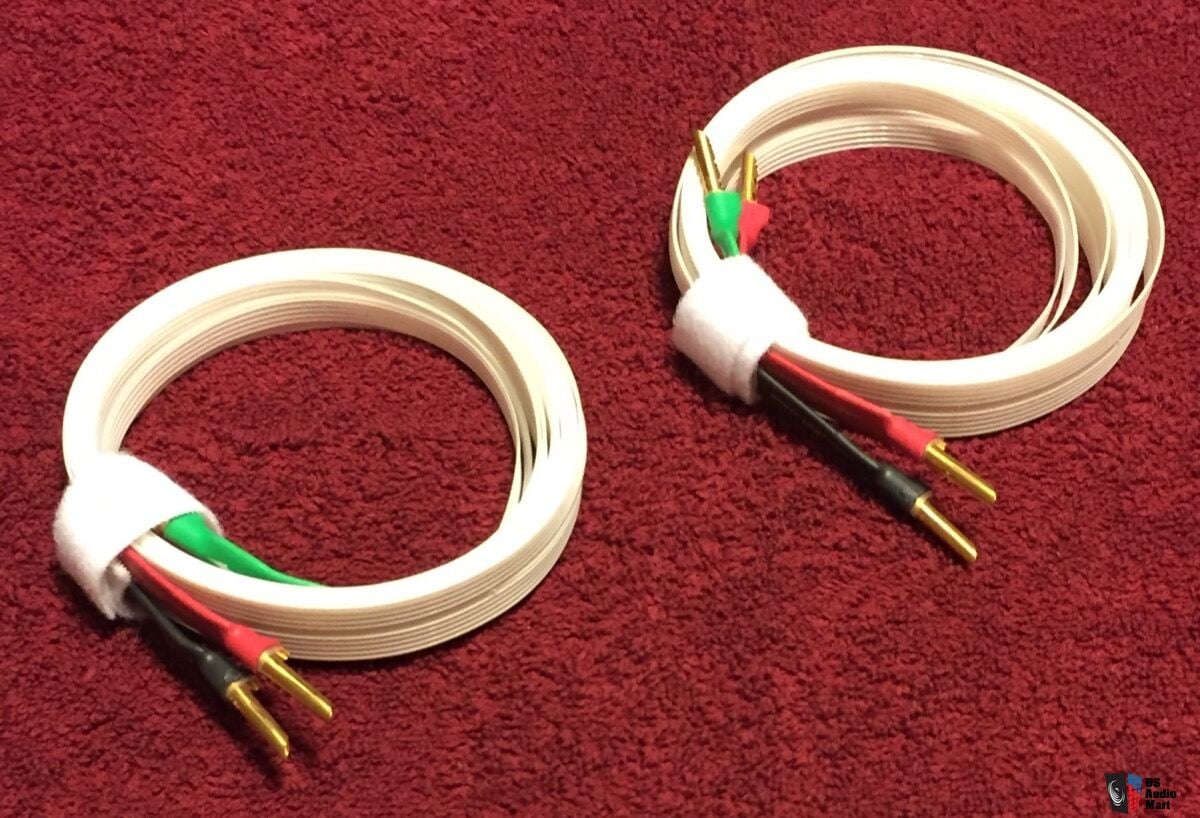 Anniversary
Equipment Review
By Alan Sircom
White Lightning Anniversary has the toughest job in the
Nordost catalogue, because it wears more hats than
the brand’s other cables. The suffix ‘Anniversary’ is there
for a reason. White Lightning is the spiritual heir to the
original Flatline speaker cable from 20 years ago.

Flatline
needed big shoulders, because it revolutionised loudspeaker cables and was
the foundation stone for everything Nordost stands for today. White Lightning
Anniversary shoulders its own burden, but in a very different way.
The starting place in the Leif cable range, White Lightning represents the
first analogue interconnect and loudspeaker cable in Nordost’s line-up that is
likely to be demonstrated as a product in its own right, which means it’s likely
to be presented both to those who are currently sceptical of the significance of
cables in general, and those who ‘get the cable thing’ and are wanting to check
out what Nordost does.

As such, White Lightning is likely to end up in the widest
range of systems, both in cost and performance terms.

If it succeeds, it opens
some minds to the importance of cables and Nordost’s design ethos. If it fails,
it turns sceptics into cynics and pushes people away from more up-scale Leif,
Norse 2 or even Odin solutions. It must also be able to be good enough in its
own right to be the end-point for some, and the jumping off point for the true
seeker.

That’s a lot of responsibility for one family of cables.
Both interconnect and speaker cable
feature silver-plated 99.9999% purity,
oxygen-free copper solid-core conductors
in an FEP (Fluorinated Ethylene Propylene)
insulation.

The loudspeaker cable uses ten 16
AWG conductors in its construction and the
interconnect features four sets of 26 AWG,
fully shielded by a braid with 95% coverage.
In creating the new Leif range, the company
has paid obsessive-compulsive levels of
attention to the connections, geometry and
configuration of these cables, to round up
and eliminate any subversive elements,
including padding in the interconnect, stray
dielectric effects in the loudspeaker cable
and other enemies of SMERSH.

All of which looks good on paper, but is
functionally meaningless if it does not translate
to the way the cables perform in a system.
Fortunately, it more than ticks that box too.
Nordost recommends a thorough burn-in
before serious listening, ideally by a dealer
who has access to one of Nordost’s own Vidar
machines. I gave the cables a week under the
cosh with a Blue Horizon Proburn burner-innerthingy.

I left one interconnect cable unburned
for comparison purposes, and yes it makes a
difference, to the point that if someone offers
the service, jump at the chance.

Suitably burned in and plumbed into one
of several different systems, it’s clear White
Lightning is more than up for the challenges
it faces. It’s like an aural accelerator, playing
the leading edges of music with precision
and speed of attack, as if the musician was
unimpeded by the recording and replay
processes. This is a common Nordost trait,
and as you move up the ranges, this leadingedge delivery becomes increasingly more
pronounced and almost uncanny. If you are
used to the Nordost way of doing things, this
is an immediately recognisable characteristic,
which the White Lightning does extremely well

✔ Official Manufacturers Warranty for two years valid in India and Service thru us not third party. ✔ Brand NEW in Box & 100% Original Certified ✔ Authorised Distributor& Stockist ✔ Price includes GST and Shipping ✔ Electronic products run on 230 volts Free Standard Acessories. Free Post Purchase Technical Support. Shipping Thru us and not third party drop ship. We only Sell what we can guarantee the service.